Have you ever played the game Getting Over It? It’s a terrible, terrible game created by Bennett Foddy where you play as a man sitting in a cauldron, and the entire purpose is to climb up a very large hill with a hammer. Sounds simple in theory, but in the words of the creator, this game is made to hurt people. And it does that well.

We used to play this game on our breaks. I say used to, because after falling off the cliff so many times and having to start over, Michael (the owner of the company) uninstalled it from Steam in a fit of climbing rage (or moment of clarity, depending on how you want to see it). And all was well in the land of Full Stack Talent.

A few days after The Great Uninstallation™, we were all working quietly at our desks and Michael turned to us and said “Wouldn’t it be funny if we made a résumé for a climber, but like, we put a bunch of developer keywords in there and see if any recruiters reach out to us?”

And thus, Django Ovrette was born.

We created a doc file on our shared Google drive and off we went writing a résumé for a professional climber, stacking it with as many dev keywords as we could. My personal favorite is “pretty huge python, or php, as I like to call him.” We spent a couple of hours perfecting the résume (stopping to cry-laugh a few times), creating a google voice number and a new email address, and when we were done, off Django went to the internet! We then searched for a few of the keywords (like php, yii, django, etc) and there he was in all his glory. 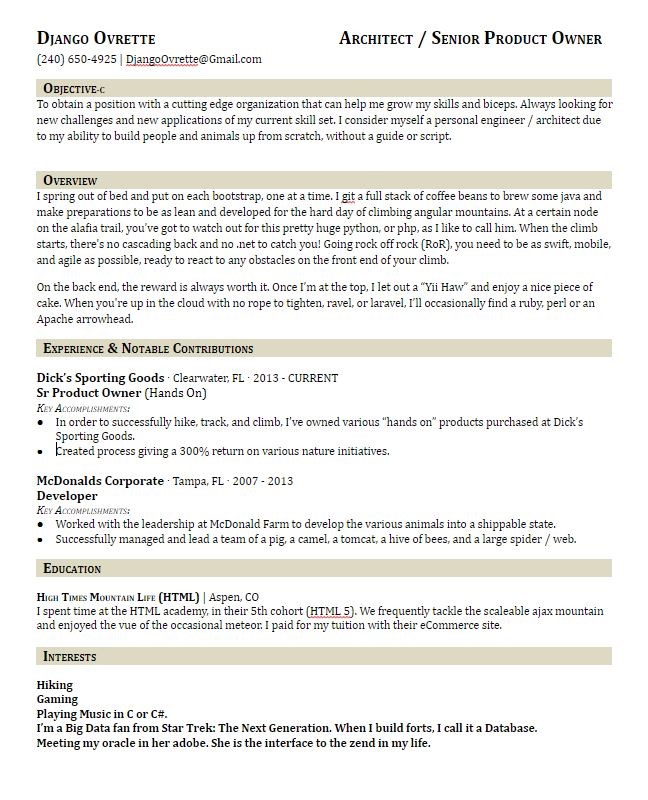 Django, in all his glory. Can you catch all the references? Hint: there are a LOT.

We went back to work, and waited for the calls and emails to roll in – and it didn’t take long. We posted the résumé on January 26th (a Friday, for reference) in the afternoon and had emails when we came in on Monday morning.

Being that I’m a huge data nerd, I took the liberty of compiling some information on the recruiters who reached out to Django.

As of January 26th (keep in mind, this is less than a month), Django has received:

50% (roughly) were personalized for Django

Of these communiqués, 2 voicemails stood out. One was a recruiter from a small, local firm stating that she wasn’t sure what Django’s role at Dick’s was, but she wanted to speak to him about his experience, because “clearly you have some dev knowledge, but I can’t tell if this is a joke or not.” She ended up calling Django twice and emailing once.

The second voicemail came from a senior recruiter at a mid-sized recruiting company, and it started with her laughing and saying this was the best thing she had seen in 17 years as a recruiter. She continued by saying she printed it out and passed it around the office, and asked for a call back because she wanted to know who was “really behind this.” We saved that voicemail.

What we learned from Django’s foray into job searching is that, unfortunately, most big recruiting firms frankly don’t seem to actually spend any time on you. Form letters, keyword searching rather than actually reading your résumé, emails only with no call follow up, etc. Django saw much better communication with the folks who came from small recruiting agencies – they reached out with personalized emails and followed up with calls. Being that we are a small recruiting agency ourselves, we really appreciated seeing the parallels, and it reinforced that we’re doing it right by going for quality over quantity.

Big guys, don’t forget your candidates are people. Spend the time to actually read their résumés and see if the qualifications actually match instead of running their CV through a keyword search. We know your time is limited (trust us, we do) but so is the candidate’s – and they deserve to have someone who is dedicated to finding them the best career match possible.

Small guys, keep it up. Your personal touch and solid, constant communication and follow-ups are immensely appreciated, and probably make the difference on whether a candidate/client will want to work with you or not.

This article was written by Roxanne Williams, who works at Full Stack Talent, a technology recruiting agency in Tampa, FL.