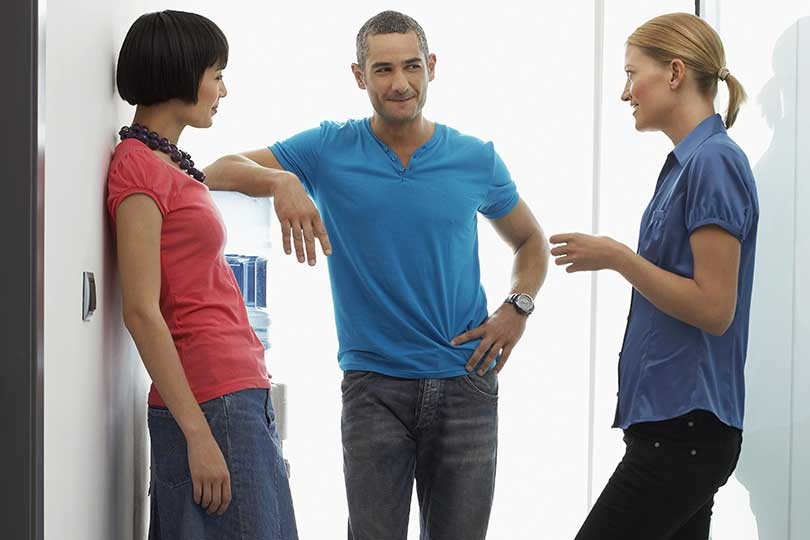 It’s great to feel like you have friendly colleagues and even better when they become your friends outside work, but there are a few danger areas to avoid during your 9-5 interactions.

I am a big offender with this one. I used to have long angry debates with one of my cube neighbors about everything from social welfare programs to LGBT rights. Not only was it unprofessional, it was also distracting for everyone who I now realize could hear us bickering all day. I didn’t change his mind, he didn’t do anything besides offend me with his opinions, and our whole office probably found us annoying. Plus that irritation spilled over into our professional interactions, too.

I know it’s just small talk, but griping about your exhaustion level, unless you need some legitimate accommodation in your workload, is tedious (and probably self evident if you’re yawning and downing a vat of coffee at your desk every day).

Some experts feel like office confidences build stronger bonds between team members; others see it as divisive and counterproductive since venting rarely actually leads to positive change or resolution of a tense situation.

If something bad is coming, you’ve just spent extra time dreading it. If it comes to nothing, you’ve just wasted the time of everyone you spent swapping conspiracy theories with!

Bad for relationships and bad for the workplace, blanket accusations like this rarely have positive results. Try “I” statements instead—”When you [fail to deliver a report on time] I [feel frustrated and fall behind on my deadlines].”

I have mixed feelings on this one because agreeing to anything asked of you doesn’t usually lend itself to strong boundary setting. That said, be a team player when you can, since you’ll probably need some help yourself before long.

I thought only irritating internet commenters employed this one but apparently it’s spread into the outside world. There are more direct ways to voicing your opinion or a differing perspective than this grating correctional phrase. Just leave it out!

Many of these were probably covered in your company orientation, but one that often gets overlooked in many places I’ve worked is weight or eating habits. At my last job I had a well-meaning coworker who could not stop herself from commenting on what I was eating or not eating, characterizing a pizza lunch as “Oooh, good to you day” or “You’re so bad!” when I reached for a sweet snack afterwards. She also commented on my weight—but only when she thought I’d lost some. Again, she thought she was being sociable, but it made me really uncomfortable and made her somebody I was hesitant to work with in the future.

I hate to say it, but sticking to only discussing your job while you’re at work may be the safest way to go.

7 Things You Should NEVER Say to Co-Workers